I get a number of questions re. what I play and how I do things. This article is basically a list of the instruments I play, the songs you’d hear them on and some links to more information on them.

Kimball Upright Player Piano. I got this from a girlfriend who owed me money. When she walked out she left me a note saying I should take it in lieu of payment. Seriously. But a piano is a good thing to have; even a crappy piano. I had it tuned by a friend who remarked, “Well I’d say sixty two or three notes sound OK. That’s not a bad average.” 😀 That said, there’s something nice about feeling the sound as you play… and not having to wait for some electric device to ‘boot’. Good, bad or indifferent, there’s nothing like a real instrument.

All the synthesized sounds you hear are various pieces of software played from a keyboard directly into the computer. These include Native Instruments, Inc. B4, FM8 and Kontakt; Arturia, Inc (Synthesizers) and Steinberg Halion (sampler).

The feadog stáin (tin whistle) is something I’ve fooled with since I was a kid. I play OK and use it a lot, but not in particularly ‘Irish’ way (eg. Time on Compartments.) The reason is simple, I no longer have the breath control to do the various ornaments smoothly. I have one Jerry Freeman whistle and it’s great. But the truth is that the 1 € whistle you can probably still get from Walton’s Music works just fine. 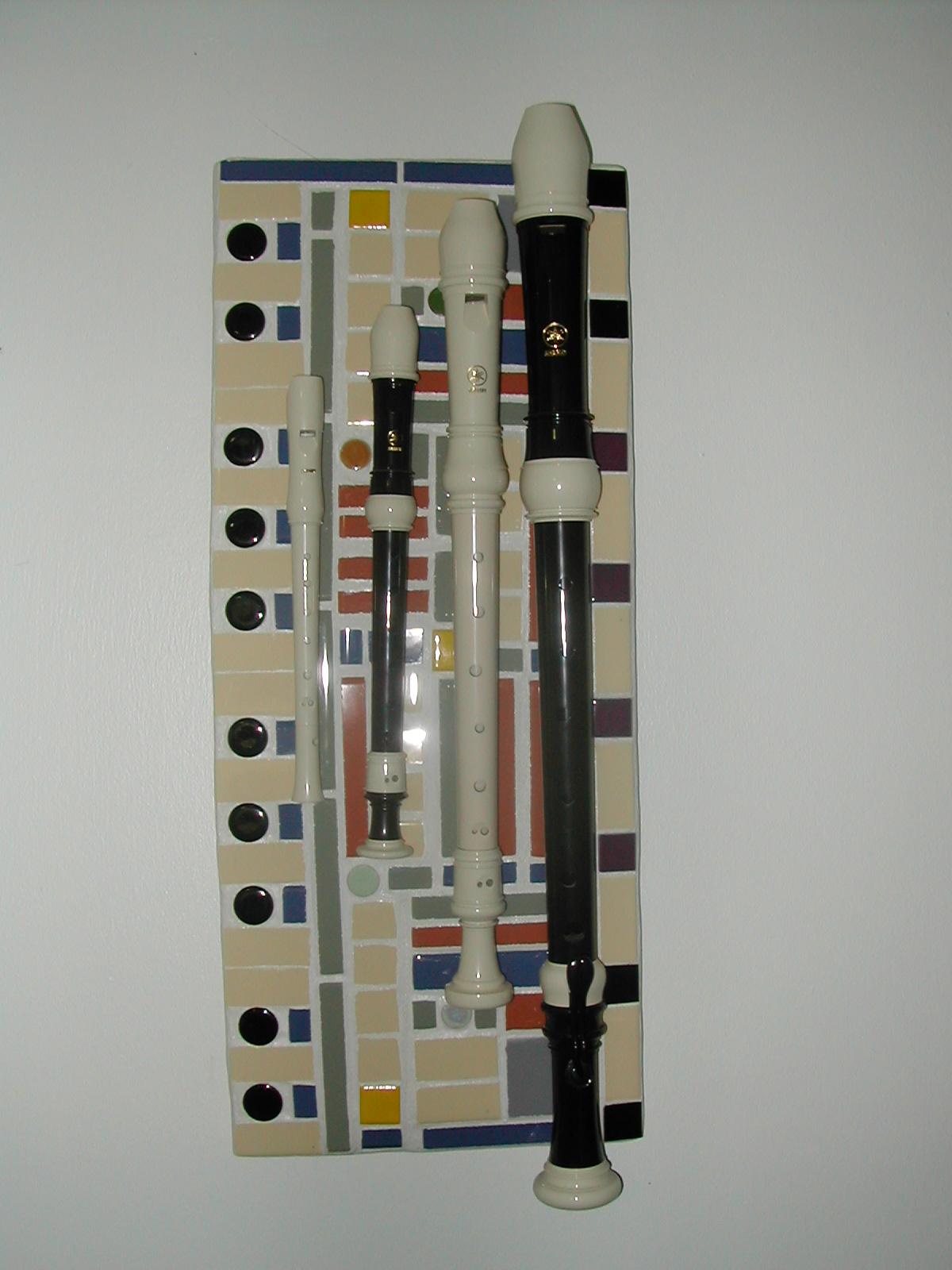 I’d like to say that I have a really nice set of recorders. I’d like to but, I can’t. I use a set of Yamaha plastics in the four common sizes. I especially recommend a baritone recorder as great fun. I used them on the title cut to Home in the middle section that people always seem to think is a mellotron.

Clarinet is a short haul from recorder. I have two student Buffet’s: a Bb and an Eb Bass. I got these at a music store I worked at years ago (more on that in a minute.) I can never seem to get the tone right so I tend to use these as backgrounds—the low winds on The One True Vine Balance.

My Alto Sax is a gold-plated Buescher. It’s the one thing I have that’s worth some money amongst enthusiasts but it’s heavier than heck on my neck so I rarely get it out. Like a lot of stuff I have, I got it when I worked at a music store years ago. The owner was always broke and would offer gear in lieu of actual cash. I’ve dared to expose it to public view was on the title cut to Home at the end when I wanted a sort of Motown-ish brass section so I played it on top of the synths a la Weather Report. It’s amazing how one line from a ‘real’ horn makes a synth section come to life.

A lot of people in Ireland still play either the bodhran. A few play the bones. It would be a lie to say I had a great interest in drumming as a kid. I try to put them in a few places for colour. The pulse of For Angela (Balance) is my hairy bodhràn, from Charlie Byrne down in Co. Tipperary.

I collected a lot of this stuff over the years (agogos, pandieros, bongos, cajon, reco-reco, shakers, etc.), and it’s probably my favourite drumming style in the world. The only commercial gizmo is a Pearl 10″ Cuica. I still practice a lot on the Berimbau (bow and arrow) which I used on This Time (Positive) as well as the caixa (snare drum).

A digression: One of the most influential albums of me life was Patrick Moraz’s ‘Story Of I’. Unfortunately it’s may also be one of the worst mixed records of all time. Which is unfortunate because of all the attempts back in the 70’s to ‘fuse’ rock and various ethnic styles, this things worked. There’s a complete samba outfit behind Patrick as well as the ferocious Jeff Berlin and Alphonse Mouzon and these guys just kill. Too bad you need a microscope to find all the thousand treasures hidden inside. For years, wherever I went, I search for those sounds.

Sadly, my beloved ‘Ringo kit’ (a 1971 Ludwig Super Classic) was stolen in 2010. So most of the ‘drums’ you hear on subsequent albums are actually Roland VDrums TD12 triggering samples from Scarbee Imperial Drums or Superior Drummer 2. I still have a pair of Alternate Mode DrumKats which I regularly use for anything that won’t require a lot of finesse. I also have a cheap-o Ludwig kit, which is mostly for keeping up my technique.

Cymbal samples cymbals don’t usually sound quite right to my ear, so most of the cymbals on my albums are real Sabian AAs and ZBTs.

I’ve done a lot with various home made instruments. This started in response to attempting to clear a nasty bamboo forest from backyard. Bamboo is an impressive material. It’s fun to hit; to blow into; to look at. (Remember that TV show Gilligan’s Island? They made everything out of bamboo.) So I started making various things out of bamboo, including boo-bams and various whistles. The fast section of the title cut on Beautiful Sounds? All bamboo drums.

And then it just went from there. Since I can record in my laundry room, I recorded my washing machine—which creates the most intense kettle drum effects you ever heard. I put mics on my tool bench. Smacking sheet metal and vises. Or recording various power tools can be great. The backing percussion for Too Far (Balance) is all my washing machine.

The actual studio is discussed here.