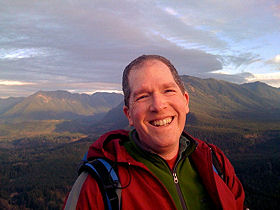 What happened to the champagne drinker from fifteen years ago? And what in Sam Hill has this guy got to be so flamin' happy about? 'Beautiful Sounds' my eye! The economy's way down. Crime's way up. And can anyone forget the impending global meltdown?

Worst of all? As I write this the latest buzz word in the music world is 'commoditization'; the seemingly unstoppable trend towards music as an exclusively background stimulus. Everyone seems to be encouraging 'artists' to make music that can be worked into other media, rather than sold on it's own merits. In fact, I am told, music will soon be 'free' because it will only exist insomuch as it is subordinate to some other human activity. Sort of like pleasant fragrances at a store. No one will actually consider listening as a valuable exercise in the twenty first century. I am being told that my future is writing music for games; for commercials; for TV; for web sites; for relaxing soaks in the tub with two or three of one's closest friends.

To which I reply, "'Commoditization'? Sounds a bit too much like 'commode' if you ask me, pal."  I still believe that music matters. Truth. Beauty. Highest pursuit on mind and heart. And all that crapola. Love it. Hate it. But if I want to be background noise? I can go visit the kids. Cue rim-shot.

Unlike my other records, this CD has no definitive 'theme', other than an attempt to make some, er... 'beautiful sounds'. Which is not to say necessarily 'pretty', but in the sense that my old music prof would have called 'beautiful'... worth repeated listening. After all, I'm asking you to actually pay for this so it's the least I can do. In fact, in many ways this is the least 'pretty' record I've done.

The only major trend in this record is that it is more overtly political. Or rather it expresses more fully my outrage at the current and systemic cynicism which is ruining America. Like many immigrants, I have an added dash of appreciation for America that most 'natives' seem to take for granted. The fact that most of our current problems are self-inflicted drives me absolutely nuts and a lot of the material reflects that upset. Every system of which I was taught to believe, including democracy and marriage is dependent on one fundamental idea: that reasonable people can and should be able to change hearts and minds; both in others and within themselves. You have to believe that your spouse, your neighbours, your representatives and yourself are open-minded enough to fix problems and get better. If you don't really think things can improve in whatever system you're involved with? If you really don't think you can do anything about it? We're pretty much lost, mate. I'm tired of everyone waiting for someone else to 'fix it' but still bitching about it.

It seems that each album gets harder to make. I have no idea why. You'd think I'd be getting better at it by now. Or maybe I just notice the flaws more. Mixing was done in Seattle during the record-setting snow fall of 2008. Mastering by Rick.

As per usual all the noise making was done by yours truly. Those who want some details on what gear is actually making the aforementioned sounds can find it by clicking on the Gear Page.