I Need A New Drum Kit—In Praise Of Ringo & Art

I Need A New Drum Kit—In Praise Of Ringo & Art

My drum kit she is a gone. And she’s a no coming back. My loverly Ludwig Silver Sparkle set (aka ‘Old Ringo’ appears to have been ‘liberated’ from the storage space I had kept it at during my recent studio renovation. I am told that it is not insured for the current market value of $1,500 smackers.

So it’s time to mourn. Not just for the dough-re-mi. And not just because it was my pal for several decades. But rather because it was a critical part of my education as a musician. Drums are a big deal. Even if you’re playing bass or guitar, the more you know about ‘the set’, the better you do your job. So I shall grieve.

And then? I gotsta get me a new one. And, since every loss is also a chance to ‘learn something’ (grumble, grouse, grumble), I think I ought to use this tragedy to re-think my drumming.

From Pee Wee To Ring-o

My whole concept came out of my early fascination with a particular type of drum kit ‘sound’. I did not put it together until much later, but I’m instinctively drawn to a certain way of hitting the drums which I can only describe as ‘jazzy’ (and boy do I hate that term, so you gotta know I mean something when I use it.) 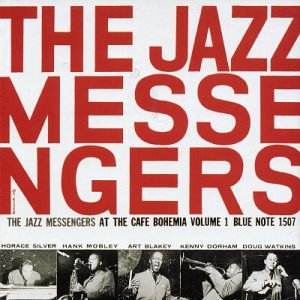 To this day I can still remember the first time I heard Pee Wee Marquette announce Art Blakey’s band on Live At The Café Bohemia. Man, that ‘latin’ beat and the crashing of all that stuff going on at the same time.

I knew just what he was on about. And when you saw Art play—and in fact, all the guys from that era? The most modest of kits. Just one or two cymbals. And one or two toms. That’s it. That’s all they needed.

No, for old school guys, you made up for a ‘lack’ of things to hit by virtue of the fact that they all rang together!

Ringo was the same for me. Same orchestral sound. The antithesis of a drum machine or a ‘modern’ drum kit with lots of separate sounds. But the funny thing about Ringo was how many rules he broke. And yet how huge he sounded. Did Ringo feel the need to keep a hi-hat beat going all the time on In My Life? Of course not! He just alternated whenever a beat needed filling. No ‘modern’ drummer would dare do that for fear of leaving to much ’emptiness’. But with that big sound of his (and Abbey Road Studio #2 with all that echo), he could leave space and still sound just like a symphony.

When I started playing, I gravitated towards the Ringo sound for a couple of reasons:
1. It looked like the kit I had. There was no point in trying to do stuff with eight tom toms like that guy in ELO because I only had one (just like Ringo!)
2. I did not then (and do not now) have the world’s greatest limbic independence. In other words, I have trouble walking and chewing gum at the same time. Ringo’s style validated my ‘less is more’ approach.
3. But at the same time, Ringo had that great old school stick control. On a lot of tunes he does sixteenth notes on the hi-hat and ride with one hand while still keeping a great back beat on the tom and snare (I Feel Fine). That sort of thing I could do. Just like the guitar, if I could concentrate on making one aspect sound really cool I could somehow manage to keep the ear from recognising that the rest of the show was pretty mundane.
4. Ringo made his fills and licks count. Name one guy with more memorable drum fills? Go ahead, I’ll wait. Bonham? Maybe close. But all the other great rock drummers usually had one or two knock out licks. Ringo had literally dozens spread over those ten years from Just To Dance With You to Paperback Writer to Tomorrow Never Knows to Get Back. Who knew one tom tom and two cymbals could take a guy so far?

Yeah, But What About?

OK, it’s true I haven’t included much ‘real’ drums on any of my records. What I almost always do is play on my trusty DrumKat electronic drums which trigger lots of those fancy ‘samples’. But the concept always came from Old Ringo. It made everything that is good (and bad) in my percussionism.

What I’m thinking about now is… I have this chance to start over. I never would’ve gotten another kit while Old Ringo was still alive. It woulda felt like cheatin’. But now? Woo hoo! I’m a free man, pardnuh! I mean, I loved the thing maybe a little too much. I’m thinking now that the kit… and the concept that went with it, kept me from stretching out to places I should have been going along with my other forays. And it sure kept me strapped to the same technical limitations.

I Need A Wing Man

So I’m asking all of y’all to be on the lookout for the next Ms. Right. If there’s a drum kit that you know of that’s for sale? Let me know! Even if you’re in Pittsburgh or Louisiana (I hope not right now, mate!) and I’m in Seattle. I have no problem at this point in my life starting a long distance relationship—for the right piece, that is. 😀 The main thing is that we all keep an open mind on this so that I make the right choice. After all, this is a relationship and it is something I intend to hit. A lot. For a long time.

I want the next kit to be as good and true (and able to take just as much punishment as) good Old Ringo.

OK, enough with the wife-beating metaphors. Help find me that new kit and drown my sorrows before I go even crazier!