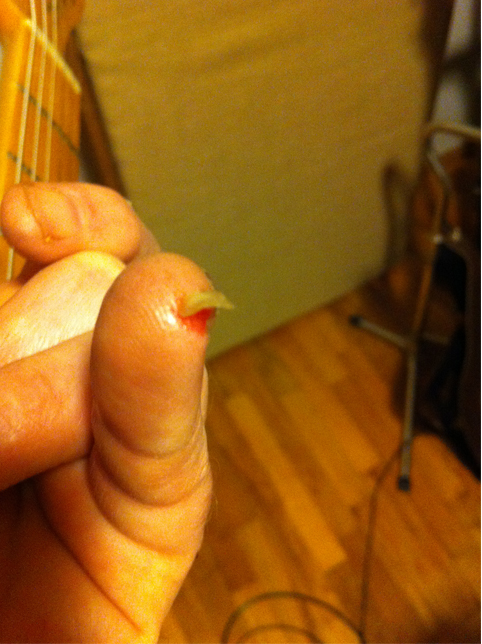 See this? Do you wanna know what this is? Do you like what you see? 😀 I’ll tell ya what it is. It’s the look of real commitment, baby. Writ large and in the flesh. (Well, at least the flesh of my left pinky; but still.)

It also means that I’ve actually been practicing hard enough to break something… which in the good ol’ days always used to be a good sign. Currently I choose to believe it’s not a sign that I’ve become totally accident prone and that everything is gonna go smoother than teflon.

Practice is a heck of a thing. I rant quite a lot about education and I’ve had my share of students who think I’m too hard. But it’s my belief that no matter what anyone tells ya, mind-numbing repetitive practice is an important part of mastery. So you better like it. Or learn to like it. As Pete Rose liked running out ground balls.

I am generally skeptical of efforts which promise to make learning a given skill ‘fun for everyone.’ I believe that a lot of it is just genetic. Some people dig practicing and some don’t and I’m not sure that can be taught. One thing I am sure of: I’ve literally never met any truly accomplished musician who did not enjoy practicing. They may say otherwise in order to not look like a dweeb, but I’m pretty sure the same mechanism is in play that makes some people into ‘gym rats’ and others monks. A certain percentage of people just get off on a particular form of repetitive exercise. Most do not and given the choice will avoid such things at all cost. And thinking you’ll change that percentage significantly with any fun device or ‘method’ seems silly to me. Far better to try and find an activity for that person that is truly compelling. (I guess they used to call that ‘career counseling’. 😀 )

David Finkel, the just retired founding cellist of the Emerson String Quartet says that individual practice is like your underwear: you need to have it clean before you put on your suit. There’s an image (it’s also classic Yiddish humour if you ask me.) But I know what he means. Until I can play through a complete set, to tempo, no stops or visible flubs? It’s like that dream where you walk into school naked; I don’t even have my drawers on. I don’t want to press the metaphor too much further so I’ll be briefs. 😀

With two weeks to go until the first show of the summer, I’m no longer feeling naked. So now, with a jumbo-size bottle of nu-skin, the real practice can begin.

PS: The Emerson Quartet’s final record with David Finkel (Journeys) really is something. If you wanna hear how almost obscenely, deeply, rich a cello can sound, this is the CD for you. It features the best performance of Schoenberg’s Verklarte Nachte I’ve ever heard. If you don’t think you like Schoenberg, you’re wrong. This is achingly romantic stuff; a true successor to Beethoven’s final quartets.