A new way of working on a new album: It’s all down hill from here! The Tacoma Narrows Bridge and Galloping Gertie. Mussorgsky and Pictures At An Exhibition. Miles and Sketches Of Spain. Jupiter and Shitty Donuts. Moby Dick and Ahab. 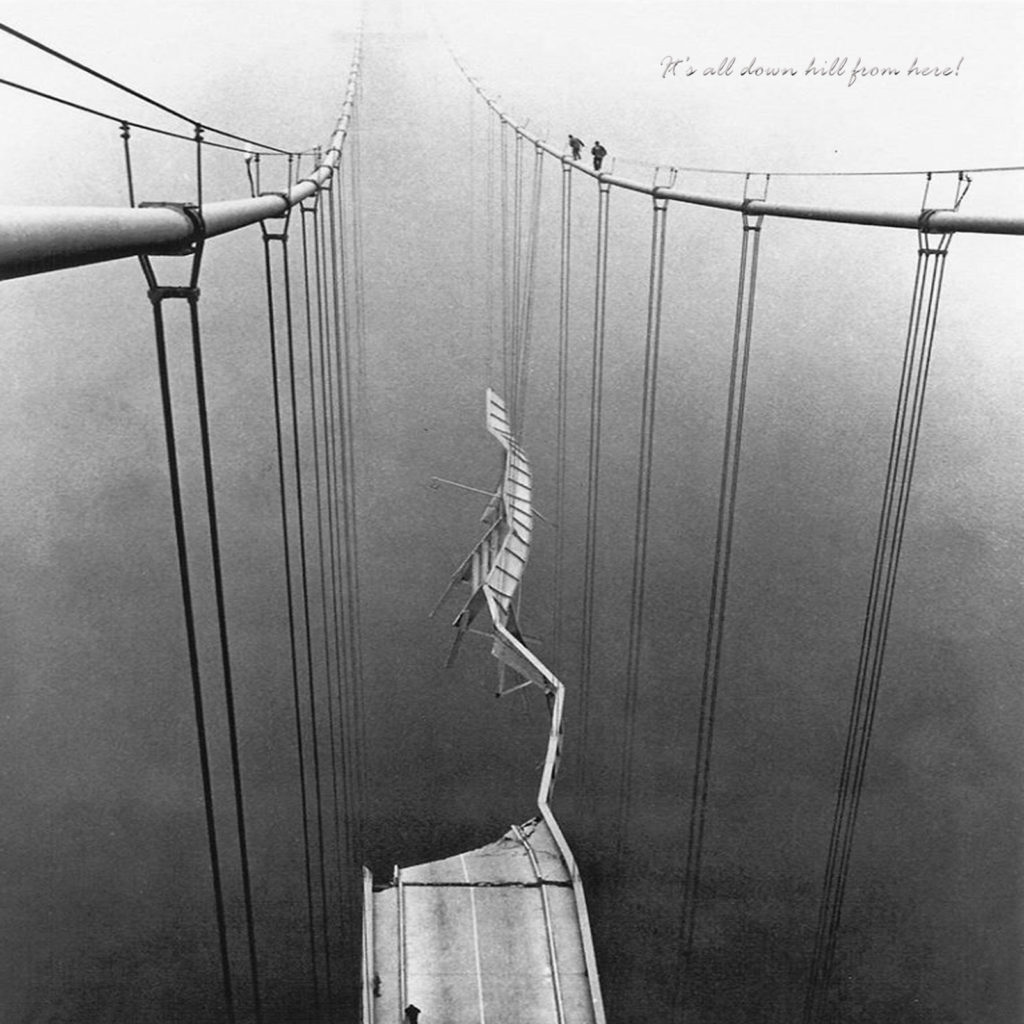 JCHOh, hell no. But there is a cover.

RCWhat? You have a cover, but no album?

RCWhy are you showing this?

JCHWell, this is another composing technique.

JCHI kept having these ideas and wondering how they all fit together. And then I saw this picture and something just hit me. This is it. I don’t know what it means, but this is it.

RCOK. The image fits all your ideas.

JCHNot exactly. But I knew it was part of it. And then I was doing a promo video where I was talking about how, “It’s been a rough year folks, but it’s all uphill from here!” And the guy filming said, “No, that’s not how the expression goes. If you want to say things will get better you say, “It’s all downhill from here.”

RCRight. You didn’t know that?

JCHI dunno, maybe I did. Even after 45 years here, sometimes I still forget all these Americanisms. (laughs) Anyhoo, he told me not to bother with that expression; that it wouldn’t be taken right.

RCAgreed. Especially since things are getting worse now.

JCHWell, this was back in June, when things were looking better. Anyhoo, I kept thinking about that expression. And then I went back and looked at this piccie again. And I’d forgotten about the two guys at the top looking down, right. It just begged for a caption. And…

RCIt’s all down hill from here.

JCHRight. Except ya gotta do it in the most optimistic, pro-business voice imaginable. “IT’S ALL DOWN HILL FROM HERE, BOYS!”

RCThat’s as dark as it gets.

RCNot like you do. (laughs) But I get it. I gotta say, it doesn’t sound particularly optimistic.

JCHIt’s not. I frankly think it’s pretty much all over now.

JCHYeah. Seriously. This article by David Roberts at Vox pretty much sums up where I see things.

RCNow it seems like you’ve been on a downward spiral, son. Wasn’t Progress supposed to be the be all end all of your cynicism? (laughs)

JCHIt sure was! (laughs) But you gotta admit, we’re now in the Ten Plagues stage of existence.

RCYeah, but the ten plagues come before redemption, son.

JCHWell, maybe. But that’s not where this record is goin’.

RCSo what is that picture?

JCHWhy it’s Galloping Gertie! The original Tacoma Narrows Bridge. Slightly after the fall, I should think.

RCAnd yet, they rebuilt it, so it all had a happy ending.

JCHDude. We’re not getting metaphysical this time. I’m just tellin’ ya where the record is going.

JCHNot exactly. But I’m starting with this picture to guide the composition.

RCRather than doing the record first and then finding the right cover.

JCHYes. And at first I thought it was nuts until I started thinking a little.

JCHI know, right? But if you look through music history, a lot of great music was written in response to specific images.

RCBut this isn’t The Ballad Of Galloping Gertie.

JCH(laughs). I love that. But no. It’s not a story. It’s my impressions of the image. But I know what you mean. One great example is Mussorgsky’s Pictures At An Exhibition. It’s a series of small pieces, each of which describes a particular picture he saw at an art fair.

JCHWell, I’ll regret this because it’s not one of my fave albums, but the first thing that popped into my mind was Miles’ Sketches Of Spain. It’s definitely not telling a story. It’s a feeling about ‘Spain’.

RCBut you’re not really responding to this image in particular.

JCHWell, the image fits how I feel. I had ideas about what I wanted to say before I found this image. But they were this amorphous cloud. Seeing this image, suddenly brought the stuff together. Like you’ve got all these gases floating in the cosmos and then they all get whipped into shape and all of a sudden you’ve got…

RCSorry. It was just coming straight down the plate.

JCHNo, I get it. But what I don’t think you get is just how unpleasant composing is for me.

RCRight. You’ve talked about not wanting to be perceived as whiny.

JCHI don’t. But there is this period, and I’m right in it now, pal, where I cannot stand working on this shit.

JCHBecause no ideas happen. Or nothing good. You just have to keep doing it and doing it and doing it. And you know, every day it’s gonna be just crappy. Every day you know you’re going into a situation where you’re gonna be creating crap. And even while yer doing it, it’s unpleasant, because you know it’s crap. You feel me? Every day I’m making the donuts, knowing all the time that they taste like absolute doggie doo.

RCThere’s no way to just take a break until inspiration strikes?

JCHWhy, I’ll strike -you-! (laughs) Wait for inspiration. I never heard such nonsense before. As we’ve discussed, sometimes I get an idea at like three in the AM but I never get up to write it down and I forget it.

RC(laughs) That can be a problem.

JCHAfter twenty years ya know what I figured out?

RCI’m sure you’ll tell me.

JCHThere’s no easy way to do this. You just pound away creating crap. But acting like it’s good. Even though you know it’s crap. And the only reason you do it is so that, at some point, after putting in hundreds of hours baking the shit donuts, all of a sudden, and I mean it happens just like that, after orchestrating the donuts as if they were tasty donuts, after all that…

JCHDo you want to hear about this or not?

RCNo, I do. It’s just that you’re rambling.

JCHOK, so I put in all this time on the shit donuts and then at one moment, BING! I get a tiny little idea that is actually good.

JCHNo. Then there is the crying.

JCHI’m. Not. Kidding. There’s at least one bout of crying. It’s partly relief that the nightmare is over. It’s partly sadness at all the time I’ve wasted. And it’s partly self-loathing that I’ve never figured out a less painful way to do this.

RCJesus, son. Although I can relate to crying in relief. Built up tension is like that.

JCHExactly! Ya know what it’s like? Ever had one of those sex experiences where you had to work so fucking hard to come that when it was over it was more relief than anything else. As in, “Thank God that’s over!” Like, you wanted to stop, but what guy ever wants to stop fucking, right? So you just knuckle up until you don’t think you can take it anymore.

RC(laughs) Wow! Too much information.

JCHBut you see what I’m saying.

RCMuch too clearly, dude. So the image has helped get you over this hump?

JCHNo. But I gotta be frank here.

RCOh, so you were being shy up until now? (laughs)

JCHI’m trying this new technique. You know, starting with the image, in order to hopefully bypass some of that pain cycle.

RCAnd how’s that been workin’ for ya?

RCLet’s hope so. But I now I gotta ask you. What about all those new snippets you doled out last Christmas? Were those pre-image?

JCHSure. I had the general theme for the record then and all these bits just started vomiting out. It’s always like that. These little satellites just appear. But it’s the Jupiter that fights me like the great white whale.

JCHThat was quite the mixed metaphor. Even by my standards.

RCSo just to be clear, this writer’s block and the image is all about the ‘epic’ piece.

JCHYes. Didn’t I say that? (laughs) God, I am getting old. All this agita is about getting the main piece worked out–the ‘epic’.

RCOK, let’s wrap it up and see what we’ve learned, children. The new album is going to be a downer, but we don’t know exactly why. The shorter songs on the album are satellites for one big piece. And composing them was no problem. But you always have a very elaborate form of writer’s block on the large pieces which involves donuts, feces and the planet Jupiter. You saw the image and it speaks to you so that’s going to be the cover art. And you’re hoping that you can use that image as a way to focus your concentration and get over that block. Is that about it?

JCHSure. Once again, you’ve found a way to trivialize my pain, Roger. Cheers for that, mate.

RC(laughs) I tried to stay with ya. But when the gas giant crossed paths with Moby Dick, well… I kinda got off the train at that point.