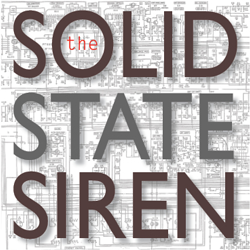 It’s here! The Solid State Siren is now ready to go. Which means a series of news items ranging from absolutely fucking fantastic to not the worst problem in the world to have:

And now a tearful thank you and a slight rant. As with so many things these days, I have very mixed feelings about ‘crowd-funding’ sites such as KickStarter. I’ve studied and studied and found them to be another one of those things (like Google, Facebook, etc.) that initially seems like a great idea but for me at least has a serious creep factor.

The appeal is not really the ‘funding’ part. You could do the same thing yourself with any website. What you’re really getting into with Kickstarter is their marketing to ‘the crowd’. In other words, you’re buying into the idea that there will be a ton of eyeballs that will stumble upon your fantastic idea or be directed there through social media.

I believe that, after the novelty wears off, this has limited value for musicians. I think that the people who got in early were the primary beneficiaries and, as with so many things on the Internet, as more and more people try using crowd-funding to get something for nothing, their individual messages will get more and more diluted.

As with everything on the Internet, just about every promise of opportunity for musicians is really a shiny penny trick. There will be exceptions of course, but in general, it is not a panacea and the disappointments will increase. Or rather, the number of people who truly need to be ‘kickstarted’ will be supplanted by projects like Veronica Mars that find it a convenient alternative to traditional marketing.

I am grateful beyond words that you, dear long-time partners, gave me the kick start I needed to get this latest record off the ground. I get hammered with tough love all the time for not doing more to get the word out. You are correct. When it comes to marketing, I have been my own worst enemy over the years. The good response to The Solid State Siren gives me the gumption to amp up my efforts to get the word out to more people.

The next step? Firming up the fall tour dates. Look for some details over the next two weeks.