You’re Takin’ Piano Lessons. Or Else.

I’ve seen this (very nice) looking advert a number of times recently. Great bit of advertising that’s about 30 years too late. It now reminds me of other quaint vo-tech school brochures like for offset printing or plastering; beautiful skills, but not really part of the modern world. I say that not to be a curmudgeon but simply because ‘music education’ has stopped being anything like a going concern.

Remember that, through the 70’s ‘Music’ used to be one of the ‘Eds’ at any decent American school. You know: Phys-Ed. Special-Ed. Arts-Ed. Music-Ed. No such thing anymore.

This poster (and a number of others I’ve seen) do a great job telling people the -intrinsic- benefits of music. How much good you’re doing for kids by teaching. Showing parents the value of Music Teachers. Basically, they’ve turned Music into vegetables. It’s good for kids so have give servings a day! Teach music and make a difference!

But Plato (yeah, really, a Platonic reference) made the -real- value of Music Ed plain 2,500 years ago. Plato wasn’t so much concerned about individual health and happiness so much as the good of society. And frankly, neither am I at this point in my life. I’ve pretty much had it up to here with what passes for ‘individuality’ these days. So I’ll tell you the real benefit of a few years of piano lessons:

BECAUSE IT MAKES PEOPLE LESS LIKELY TO ROB AND KILL YOU.

As the poster suggests there are various ‘studies’ which all focus on junk like how little Myron will do better on his SATs if he takes clarinet. But the one study I want to see is the one Plato suggested years ago: a direct relationship between music study and good citizenship. I’ve searched around for years and years and never seen one. (If you know of one I’d love to hear about it!)

My guess is that these studies have not been done (or have been done but ignored) for the same reason a lot of great science doesn’t get attention: it’s unintuitive. Never underestimate the power of human beings to respond only to what looks like a ‘straight line’.Want less gun violence? Take away the guns! Or, lock up the bad people; or the sick people; or the badly sick people. Whatever. It’s a straight line. But talk of actually -creating- better people? That’s a little too convoluted. Probably it’s just crazy talk. Either it sounds like a Nazi eugenics kind of deal or it sounds too Rube Goldberg or it sounds like a violation of my basic right to not be told how to raise my kid.

But I have always -strongly- suspected that kids who study music are less likely to go bananas on other people. This does not mean that studying music makes one more mentally healthy. Taken to its extreme, I’d guess that most professional musicians are actually a bit below average in that regard. (I’m an over-achiever! 😀 ) But this is also as Plato predicted: too much of any study, be it music or wrestling tends to create an out of balance. Be that as it may, ya rarely hear about the kid who shot up the neighbourhood who played the hell out of that banjo or sang in choir. No, the more music education one has the less likely one is to hurt anybody… except oneself.. Which should please our libertarian friends. Kill yerself, just leave me alone. Well… a life in music is the solution!

My guess is that if you just took the odd billion from the budget for instruments and 20,000 Harold Hill clones and basically mandated that every ten year old had to play in the school band for two years, you’d see violent crime would go down a decade later like a hockey stick in January. (And to be fair, I don’t care from where you rob the money. Take it from spotted owls and singing whales if you think the idea too ‘socialist’.)

Now, before I get to the objections, I have some good news and a confession. I do not think it takes more than 2 years of bondage to have the positive effects I’ve posited. I dunno why I think that except for the fact that most of my boyhood friends quit after 2 years and they all turned out OK. At some point I just started checking into whether or not the wife-beating-father-rapers you see in the newspaper every day played cello in 5th grade. You know, the way old people look in the Obits for fun. The answer? Not too many. Scientific OR WHAT? 😀 But every theory starts from a cockamamie premise.

I want to address the most basic objection to this proposal: kids hate practicing the trombone. I also want to address another basic objection to this proposal: parents hate listening to kids practicing the trombone. WRT #2: What can I say: parenting is about nothing if not sacrifice. WRT #1: It does not matter. I say again: whether or not the kid enjoys practicing his little ‘Bouree’ off is irrelevant. In fact, I don’t care if June 21st comes on year 2 and little Sally cries out with joy now that she has completed her requirement, “I’M FREE OF THIS SHIT!”, this being the first profanity anyone had ever heard out of the child’s mouth. Doesn’t matter. Even if the kid loathed every second of the experience; every drop of spit; every callous and especially that stupid fucking metronome, with all that, the innoculation has occurred. Music study changes kids. I don’t know exactly how–which is why we need the studies, but Plato was not wrong. Kids who play an instrument, even for a short, hateful time don’t end up in trailer park scenes. And that saves everyone (except the producers of ‘Cops’) billions.

Of course, in addition to the fact that this (like so many things that are true) sounds too insane to even warrant serious study, the fact that it would require ten years to see how it played out is simply too rich for any politician. The fact that we demand results in twelve months (three months is better) makes stuff like this impossible to even discuss.

Finally, my suspicion is that there is also a disregard for music ed, especially in areas where sports (football, basketball, etc.) rule. This is largely about tradition and ‘fun’ as important requisites to education. IOW: a lot of kids and communities -enjoy- football. A lot of kids can’t stand practicing the oboe. And not too many band concerts sell out vast stadiums in West Texas. You’re not gonna get too many PTAs to endorse making kids take on any more unpleasant tasks–especially ones that require oversight. (Look at how much screaming you get about overworked kids whenever the idea of longer school years is posited.) Kids need more things they -like-; not more junk they don’t. Plus: just about any Dad thinks he can coach little league football…as opposed to how many dads who long to be Toscanini to a bunch of ten year olds?

But like the poet said: Music hath this that and the other thing to soothe the savage breast. And when it comes to fighting crime? Anything that can soothe savage breasts is probably worth a shot. 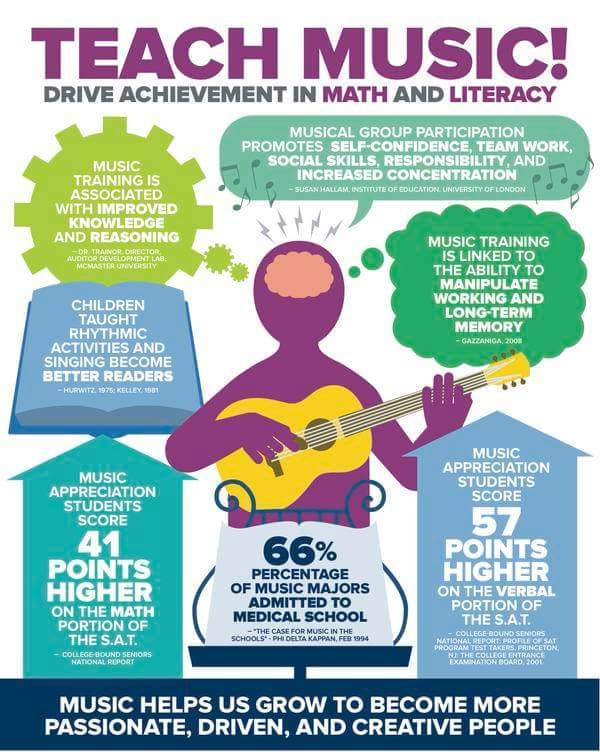