Not Transition V – Too Many Tangents

This was supposed to be a chat about another ‘snippet’ from The Boats, but it finally happened: our first failed Rant. Just too many tangents. Why Transition V and not IV? Explanations of Traveling music and Supernumeraries: in opera and nipples. The Man With The Golden Gun. Christopher Lee’s bare chest. Bond. Extras vs. Supers. Choir in opera. Some basics of staging explained. Pointless movie quotes.

Roger CortonLast time we talked you said that you were going to put it all together. But this snippet is called ‘Transition V’.

RCAnd… What happened to Transition IV?

JCHWhat do you mean ‘what happened to it’?

JCHI’ve skipped out on a lot of things in my time, pal.

RCI bet you have. But why are we out of sequence again? I thought you were done with jumping around. In fact, you said that last time that you were working on a compilation.

JCHI’m so changeable. I figured I’d get these out of the way first. Especially since we had talked about giving people a sense of the connecting music.

RCRight. So before we get into the music, talk just a bit about these transitions. What they do.

JCHIn any opera or musical, you have times where the scene changes from one time or place to another. On a practical level, you need to provide some way to give the actors time to change costumes and for the crew to change scenery. In a traditional show, the curtain comes down and there is either an intermission to give the audience a chance to stretch or the audience remains seated while some ‘traveling music’ is played.

RCThat’s where that expression comes from?

JCHI believe so. Traveling music is played right after Billy says, “We’re off to New York, Maw!” The curtain comes down, the jaunty music plays indicating that they’re on the road and then after a minute or so the curtain comes up and “New York City!”

RCJust like I pictured it. Skyscrapers. And everything. I get it. But in The Boats the curtain never comes down, right?

JCHYes. All the scene changes happen right in front of the audience. There are no separate ‘acts’ or ‘scenes’ per sé. What happens is that the Supers act as crew, moving things around as needed. And in several spots the folk musicians in the orchestra…

RCYou mean the people who play tin whistle and bodhrán?

JCH…right. They walk out of the pit and join the cast on stage.

RCSo the folk musicians are in costume?

JCHRight. The idea is that the Supers and the folk musicians are all part of the village.

RCWhat you call ‘Supers’, those are just ‘Extras’ right? Why are they called ‘Supers’?

RCThat is funny. You being you.

JCHAll I know is that it’s short for ‘Supernumerary’. And I can never hear that without wanting to giggle.

JCHWell there’s that, but I first heard the word in a James Bond movie. The Man With The Golden Gun.

JCHRight. So at the beginning Bond is told that ‘The Man With The Golden Gun’ has never been photographed. All they know about him is that he has a ‘supernumerary nipple’. That’s how you’ll know you’ve got the right villain. He has three nipples. So Bond has to go through all sorts of shenanigans in order to get a look at the guy’s bare chest. (laughs) 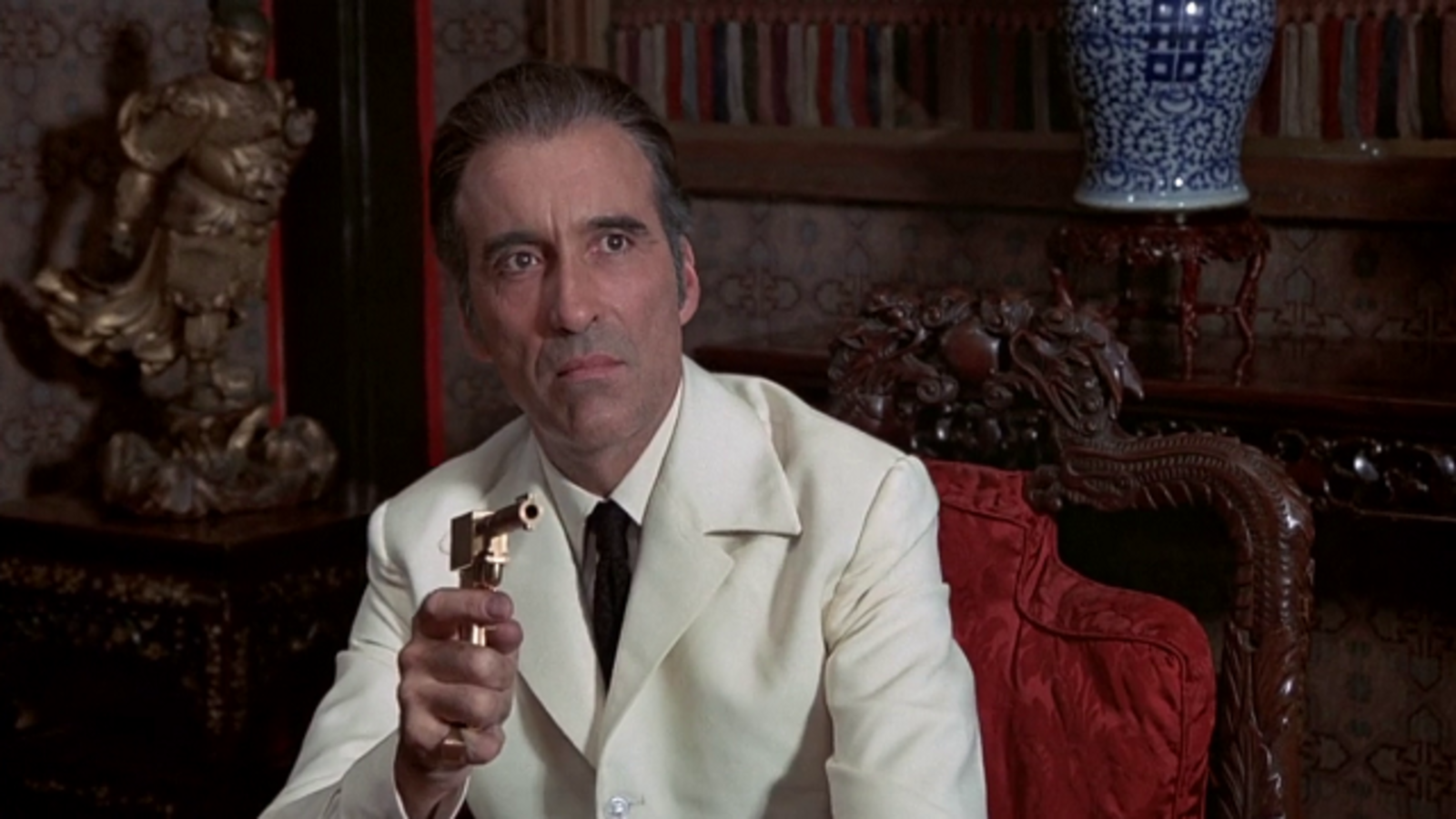 RCWow. I forgot about all that. Doesn’t sound too gay to me! (laughs)

JCHPolitical correctness, please! (laughs). Of course there is also the dwarf which adds that extra soupçon of kinky to the whole deal. But I digress.

RCYou sure do. I don’t think you can call people ‘dwarves’ anymore either.

JCH(sighs) It was a simpler time. Maybe. (laughs).

RCSo we’ve learned that a ‘Super’ is just pretentious theatre-speak for an extra.

JCHRight. I wasn’t trying to be pretentious. That’s just what they’re called in opera. No one in that world calls them ‘extras’. They take their job deadly serious. At big opera companies like The Met they’re in the union and they make a fairly decent living doing it. There’s nothing ‘extra’ about it.

JCHWhere was I? Anyhoo, the Supers. Actually, in The Boats, the Supers are the choir.

RCIsn’t a choir a big ‘ask’ for getting a show produced?

JCHActually, no. Any opera company, even a small one, is expected to have a choir available.

JCHYeah, choirs go back to the beginning of opera. Almost all traditional operas have a choir. It actually goes back to the Ancient Greeks. The choir is ‘the chorus’. They are expected to comment on the action. Anyhoo, that’s a rant for another day. My point is that you can count on having a choir and they can act just like Supers. In this case they are the people who live in the village. So they act as Extras and they sing and they move scenery around during these transitions.

RCYou brought it back home!

JCHI still got it, baby! The whole conceit of the staging is that the villagers are almost always on stage. You know, waiting in line at the auction or milling about in some fashion. During the transitions, they move the furniture, which dictates the staging.

RCWhy do it this way?

JCHWell the main thing is that it’s cheap, cheap, cheap! (makes bird noises) But I also like the idea of having something in motion all the time, rather than just having the curtain come down. It gives the thing a ‘nervous’ quality. Remember, the whole point of the show is change. Upheaval. I kept thinking about when I’ve had to move. There all these boxes everywhere. You’re half in one world, half in the next.

RCSo how specific are you as to what do the Supers are doing at any given moment?

JCHNot at all (laughs). That’s one great thing about this–this is an area where I simply leave it to the imagination of the Director. Take it away, Bernice! (laughs)

RCI don’t get it.

JCHLook, I’ve ranted about this a lot. Even I remember me ranting about this. If this were a hundred years ago all I’d have to do is whip up a score and my work as ‘composer’ would be done. My work load would be about a third of what it is here, what with making all these audio tracks and what not. You just leave everything else to someone else.

RCAs you say, It was a simpler time. But then there’s that loss of control.

JCHYES! CONTROL! I MUST HAVE IT! (laughs). But I gotta admit that it’s getting to the point where losing control is looking mighty appealing. Get it?

RCI get it. I always thought this would get easier for you as you did more and more ‘opera stuff’. But here were are, now over two years into this (ahem) ‘process’ and you’re whining as much as ever, son.

RCDamn it. We never got to talking about the music. Damn you… and your tangents… to hell!

JCHNow hush there, Scarlett. Tomorrow is another day!

RCThat really does bother me when we get sidetracked like this and don’t talk about the thing we were supposed to talk about.

JCHAre you not entertained? ARE YOU NOT ENTERTAINED? (laughs) All movie quotes aside, that’s how I look at this. I mean if you had a good time and I had a good time, who cares if we got to the marketing pitch? (laughs)

RCI didn’t have that good a time.

RCNever. Well, at least this gives readers some idea of all the editing I have to do.

JCHL. O. L. I think you’re right. When people comment on these chats they always ask me why we don’t just publish the raw audio and screw these transcripts.

RCAnd for the readers this is the answer. I end up throwing out two thirds of the bullshit tangents we go off on. This is the easiest way to edit this down into something relevant to the topic.

JCHWell, as my dear, departed loved to say, “All bullshit aside…” All bullshit aside, I totally appreciate it. I admit it: once or twice I’ve gone off on these tangents just to be irritating. (laughs) I am a terrible person. You’re one of maybe five people I’ve ever known who have been willing to put up with that kind of shit. From the bottom of my heart, thank you. I will try harder to stay on point as we get near to the end of this. I mean, I know this whole ‘opera’ thing has been trying.’

RCYou’re welcome. But this whole session has been pretty crap. We should just bag it and start over on this one next week.