An oldie but still a classic: Open Your Eyes, the epic from Compartments in a new video. Ants again for the first time. Rick Wakeman’s cape.

Roger CortonI see you redid the old videos for Open Your Eyes. You combined the three parts all into one. Why?

JCHAnts (laughs). You remember when the computer servers crashed last summer? I lost a ton of old original materials.

As Editor, this is where I jump in with a ‘We Regret The Error’. As our readers know, I chop out a lot of material from our chats in order to make these (cough) discussions readable. My goal is 800 words even though we rarely make it. Sometimes I’m not as careful as I could be and in this case, I hacked out the entire portion of our chat on 08/24/16 where we discussed the server crash. I apologize for not finding somewhere to put it at the time because it was a huge deal and JC lost much of the original tapes, emails, artwork for the first ten years of JCHMusic. At the time JC insisted on focusing on the now, meaning getting on with our discussion of his new material. In any case, I’ve put some of that discussion back in the comments section of that Rant and I’ll create a separate post with the entire text soon. As they say, ‘We regret the error’. OK, now back to our live show.

JCHSome of that experience was a disaster for sure, but some of it was a blessing in disguise.

RCYeah, the spinning logos were pretty cheesy (laughs). Which was a shame, since the piece is so great. It’s still the one piece people ask about the most. I mean, it’s like your ‘Close To The Edge’.

RCYou know what I mean.

JCHI do. I’m just giving you a hard time. For whatever reason, it seems to hit all the food groups for Prog Rock lovers of a certain ilk. Which is odd because…

RCBecause the rest of the album is nothing like it (laughs).

RCTalk about that for a second. What happened. Why go ‘epic’? Your first two albums seemed to sort of waffle back and forth between ‘progressive’ and ‘conventional’. I would almost put them in the category of things that Sting and Peter Gabriel and Paul Simon were doing–stretching the boundaries of ‘pop’, but not too far.

JCHI think that’s very fair. I wrote songs one at a time at first. I didn’t have any over-arching ‘plan’. As I finished Positive a theme or a ‘concept’ if you will sort of revealed itself. And then with Superpower it got a bit more structured; the sequence of songs and the songs themselves started to feel more like organs that were part of a ‘body’. And Superpower sold really well. It just surprised the living shit out of me. I had no idea what to do with that. I mean like the guy says in the song Danielle Cameron, it really was

JCHInstant (cough) ‘career’. And I thought Compartments would essentially be ‘Superpower Part Deux’ (laughs). And it just wasn’t. For some reason the material was about all these guys who are me, but ALL AT THE SAME TIME. You understand?

RCYou’re the aging rock star, the loving father, the white guy totally out of place trying to sing the blues, the Irish kid in the Joyce story, etc.

JCHRight. It dawned on me that I wasn’t writing a bunch of separate songs. I was hoping somehow to tie them all together and say to the listener, “Look, this is how human beings work. Our personalities mirror our body cavities. There are these disparate organs that look very different from one another. You know like liver, heart, kidney, lung. But somehow, they work together to create a single thing that the rest of the world sees as ‘you’. The world doesn’t see those separate gizmos, even though intellectually we know that we all have all those bits inside, right?

JCHSure is (laughs). And I couldn’t figure out how to do it! So I gave up. And wrote Open Your Eyes instead. So the record really should be called, “Open Your Eyes plus eight other tunes from the abandoned high concept album.” (laughs).

RCAs you so often say, “If you have to explain it, move on.”

JCHEXACTAMUNDO! I never bothered to mention it before because I figured people would either like the record. Or not.

RCDid you realise that Open Your Eyes was good?

JCHOh yeah. The funny thing about that record was that I was living in a basement apartment at the time. I had no real ‘studio’ so I couldn’t hear it properly at home. So I’d take early mixes to round to other studios whenever I needed to hear balances and I’d see faces light up. That was exceedingly gratifying because I rarely get feedback from the outside world—which can be frightening at times.

RCI think the song still feels the most like ‘classic prog’ of anything you’ve done. Did you try to do that?

JCHThat’s fair. I do think it was a bit of an experiment in that way. As I said, the whole ‘concept album’ thing was not working, so I just decided to do something different and this was my final permission to myself to LET GO. It really was the first time in my career that I allowed myself to just do whatever I wanted. Twenty minute ‘epic’? WHY NOT? You have no idea how much drinking it took to allow myself do that.

RCSeriously? What difference is there between Open Your Eyes and any of the other songs. It’s just longer, right? 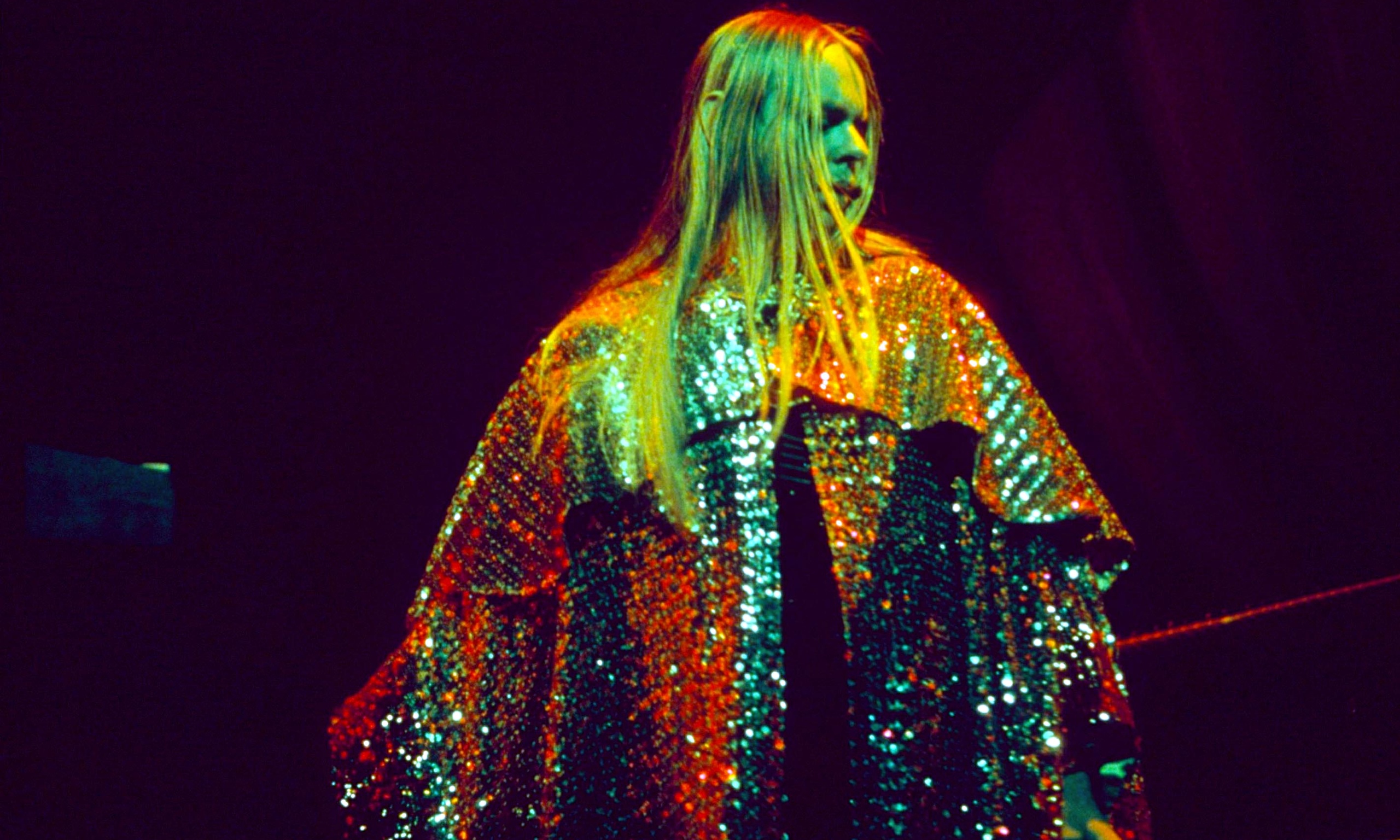 JCHNO! Call it the ‘King Arthur Syndrome’ (I just made that up, clever no!)

RCNot as clever as you seem to think.

JCHAs I’ve said many times, there’s a BIG psychological difference between writing a five minute song and then a twenty minute pretentious ‘epic’. As much as I loved Rick Wakeman with Yes? I was still the first guy at any party to make jokes about ‘The Gold Cape’.

JCHI didn’t want to write twenty minutes of meandering mellotrons. Remember what we talked about last week? what with Beethoven looking down from heaven, “Too many notes, Dear Mozart”

RCThankfully, it all turned out well. For my money Open Your Eyes is the epic of yours that I listen to most often. We might argue that others are ‘better’ in various ways, but I keep coming back to O.Y.E. over and over again. I’ve heard as much from other fans. When you’re not around of course (laughs).

JCHI suppose I shouldn’t ask, but what do you like about it?

RCIt’s optimistic. Despite the middle section, it’s unabashedly positive. Plus I like the solos. They sort of feel like miniature compositions. But not totally. I think that is what I mean by ‘classic prog’.

JCHThat’s definitely what I was trying to get to. I saw a Steve Hackett discussion the other day and it struck me how tough it must be to be that guy in some ways.

JCHWell some of his great solos are like miniature compositions. Very detailed. Memorable. They almost stand alone. So they kinda have to be almost the same way they are every night. Which would probably drive a guy like Bill Bruford nuts, I dunno. But to me when I hear a really cool Progressive Rock song, it’s got these instrumental bits that aren’t just ‘solos’ but they’re sections of the composition that are just as important as the words. That’s what I tried to do with the solos on O.Y.E. I didn’t just want ‘solos’ that filled in between verses like in a rock song. I wanted them to be themes that were just as strong. I think that Hackett did that. He might not have been as ‘virtuosic’ as Keith, but he sure as shit was a composer. Like that solo on ‘Firth Of Fifth’ just makes the song:

JCHYes, ELP, all the great Progressive Rock bands of yore looked at it that way and that’s kinda my bitch with newer bands.

JCHI think we’re getting back to where the instrumental bits aren’t as memorable as in like Heart Of The Sunrise or pretty much any Genesis song. Today’s stuff like Big Big Train or Transatlantic sounds more like, vocals, then solo, then vocals, then solo and that’s one reason why I think it doesn’t resonate as much with more people. It’s more just like really long rock songs (laughs).

Now don’t get me wrong. The newer groups do some really cool songs and sometimes–especially Big Big Train, cover some important ideas. But the instrumental bits aren’t themes that stand on their own like a Keith Emerson or a Steve Hackett would write back in the day. They’re just not as strong compositionally. Just not as compelling as that Hackett solo. Said it before, say it again. You gotta be REALLY compelling to expect anyone to listen to you for TWENTY FUCKIN’ MINUTES. Hackett’s solo says so much in those few notes.

RCWell that’s a rant for another day, children.

JCHAll this ranting about the past does make me so sleepy, Dad (laughs).