Happy Birthday Dr. Bill Bruford. Max Roach. How JC’s drumming has (cough) evolved. Terry Gilliam. Too many notes, Dear Mozart. How do you record yourself playing with yourself? And do Penis Extenders really work? Practice. Practice. Practice. Physicality vs. composing away from an instrument. Some thoughts on recording a conversation with yourself. 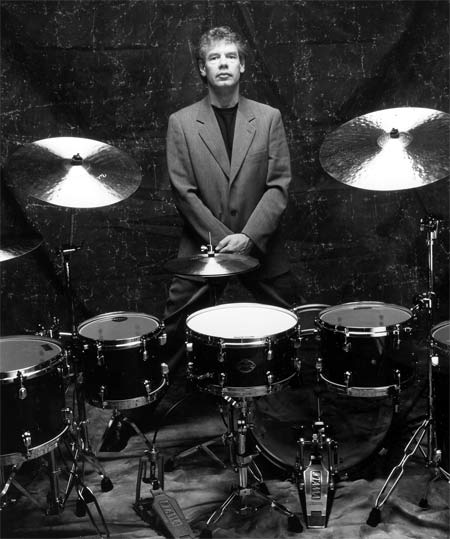 Roger CortonBill Bruford had a birthday this week. Did you know he was a PhD?

JCHI do now. I actually tried reading his dissertation.

JCHAnd it’s supposed to be some analysis of how various drummers approach (cough) ‘the beat’. That is, their approach to ‘time’. Now you know I have no trouble posting links to pretty arcane shit, but that thing? WOWSA! It never ceases to amaze me how people can be such great musicians and have such a BOOOOOOOOOOOOOOOOOOOORING internal process. I mean seriously. Especially Brits. Fripp too.

RCI know exactly what you mean. I bought one of Fripp’s guitar video courses sight unseen and I really did fall asleep watching it (laughs). The tone of his voice did me in. Maybe that’s why they got along so well in Crimson (laughs). Which reminds me, there is one thing I’ve been meaning to mention.

JCHThe tone of my voice is soothing? That’s a new one.

RCNo. The reason I brought up Bruford. I wanted to comment on your drumming over the past couple of years. That is still you, right?

RCIt just sounds like you’ve taken that to the next level.

JCHSo what you’re saying is that it was shit before, right? (laughs)

RCNo, but you and I have talked about you had a more workman-like approach before. But now, it’s getting ‘fancier’.

RCYeah, but many years ago you talked about the ‘conversational’ quality of jazz drumming–that was why you liked Bill Bruford so much with Yes. I’m hearing that in your playing now.

JCHI did say that about Bruford. For me, there was always one key guy at each position that changed things in progressive rock. And for me, he was that guy at drums. He was the only one of the ‘Prog’ guys who brought the true jazz sensibility to it. In fact, what’s funny to me is that even among the fusion bands, I mean like Return To Forever and Weather Report, he was more ‘jazz’ than most of their drummers. I remember reading lots of interviews with Zawinul where he said the reason they kept changing drummers was that he just couldn’t find a guy who could both rock it and play jazz and I know exactly what he meant. But Bill was that guy. Yes did not know what a gem they had. On those early records? There’s simply nothing else like his playing anywhere else in rock.

JCHAnywhere. He would do stuff that only a true bopper would do.

JCHSuch as use a kick drum to play an accent. Like on ‘Heart Of The Sunrise’ in the opening ‘build-up section, any other drummer would be hitting cymbals to make a point. Not Bill. Bill hits the kick drum a lot to make his points, because that’s what Max Roach would do.

See a jazz drummer has a very small kit. And a jazz drummer isn’t trying to play loud. So you can use all your drums to make statements. It isn’t like the ‘crash’ cymbal has to always be a ‘crash’ and a kick is just for keeping a beat. Sometimes the kick can be a crash. Sometimes the snare can be a crash. Anything can be anything. Bill wanted that freedom. So in any of the jazzier moments on those early records he tries to play like a real jazz drummer.

RCAnd when they got more structured…

JCHHe quit. And went to Crimson where he could get back to that more conversational playing.

RCInteresting. So back to that idea of ‘conversation’. Your playing has started to get that nuance in the past few years. Since Detroit for sure.

JCHWell my playing sure doesn’t sound like Bruford (who’s sandals I am not worthy to untie). But yeah, I always wanted the drums to be adding real counterpoint to the music, not just ‘grooving’ or ‘soloing’–which I have no idea how to do. I want people to hear that the players are having a real conversation; reacting to one another’s playing.

RCI think there’s more to it than that. When you first played me the rehearsal tapes from Detroit, I had trouble believing that was you on drums. It just didn’t sound like ‘you’, it sounded like a real drummer if you take my meaning. What happened?

JCHOK, I’ll let you in on a little secret. Promise not to tell?

JCHI… No, seriously, you have to PROMISE. Don’t even put this on the tape.

JCHAlright. Here’s the deal. I…. shit, I dunno if I should even say it.

RCI’ll edit it out. Just say it.

RCSon of a bitch. You actually had me going.

JCHLook, I know you wanted to believe there’s some ‘pill’ but it’s NOT like those penis extenders–which work great by the way. I’m living proof. With musicianship, it’s really just about putting in the time. And one thing about being chronically ill is that you have a lot of time on yer hands (laughs). So after my sinus surgery I had literally nothing to do all day except, you know…

JCHNo man, work with the penis extender. Of course work on drumming. Duhhh. I told you. My Ringo kit got stolen, so I got a cheap-o replacement and just started shedding like a fiend. For some reason, I just sat at that piece of shit all day while and that’s where most of the ideas for Detroit came from. That was pretty much the focus of most of my physicality.

JCHYeah. Most composers work in contact with some musical instrument while writing. Even Beethoven, deaf as he was, preferred to bash at a piano until the last few years–then his music changes dramatically. Just having something to touch or blow into seems to help the process. For me, at that time, I was broke and I was trying to figure out if I could get this cheap kit to sound decent; using every trick in the book and for some reason that struck me as a metaphor for, you know, ‘Detroit’ if that makes sense. Making lemonade out of lemons. So I practiced a lot. And the more nuanced my drumming got, the better those crappy drums got. And the more sentimental I got about them. And then of course, the more I could play, the the more I was able to write. Stravinsky said something I used to disagree with but now I get. You can only write what you can play. That’s not one hundred percent true but it’s almost true. It’s a lot easier to write cool shit if you can play cool shit.

RCWhat do you do if you can’t play ‘cool shit’?

JCHWell, you can think abstractly of course, as composers do. Or you can make a game of it. You can think of your limitations as part of your art. I always did that. I’d just use the bits that I could do to distract the ear from focusing on things I couldn’t do. Typical shiny penny trick. But it’s way more pleasant to have that ‘conversation’ when you don’t have to think about those sorts of artificial boundaries. I always resisted it simply because what just makes me wanna BARF is the tendency that almost EVERY (cough) ‘virtuoso’ seems to have to want to fucking NOODLE!

RCIs that why you are so much the anti-noodler (laughs). You seem to consciously do everything in your power to almost offend your listeners and not give them the ‘shredding’ they crave.

JCHIt’s true! I just can’t STAND noodling for noodling sake. The problem with having a lot of technique is that, again, people seem like they just want to use it every chance they get, whether the song needs it or not. But this is perhaps where Dr. Bill and I diverge. The message I got from music school was DEEP. That western music tradition is just EMBOSSED in me. I like STRRRRRUCTURE. I do NOT like shit that runs on.

Even when I was making a ton of money, I’d be playing gigs and people are laughing and screaming and their tongues are waggling like Bootsy! Bootsy! You know? Just losing their minds egging you on to play more and more notes.

JCHAnd I kid you not, I’d have this image of like a Terry Gilliam animation where God, this bust of Beethoven, crashes through the clouds and shouts, (posh British voice) “Too many notes, Dear Mozart!” and I get zapped by lightning.

RC(laughs) That’s such tangled metaphor I don’t know where to begin.

JCHI know! But you get the idea… that’s why (with a few notable exceptions) I tend to resent metal and ‘nu’ metal and anything that even smells like just playing notes that are not part of a real conversation. I mean, if it’s not a real conversation, then it’s not music. It’s just jerking off. If I need to play something ‘difficult’ I do it. If not? I don’t. The music dictates what I need to practice to learn to execute. Simple as that.

RCWell, kudos. I didn’t think you’d manage it, but you found a way to get that topic into today’s show. OK, so let’s get to the idea of a ‘conversation’. How does that even work? If you’re recording yourself, ‘Who’ is reacting to who?

JCHIsn’t it ‘whom’? (laughs) Well, part of the reason this shit takes so long is that I tend to record each ‘player’ several times. There’s a placeholder version of each part. And then I go back and re-record each guy’s parts–each succeeding guy reacting to the guys before. If that makes sense. The order varies depending on who’s story matters most for that piece. Just

RCYou decide that one part takes the lead in a sense?

JCHRight. It’s like a real conversation. Four people take part, but there’s always one or two people who drive the conversation. The other people kinda react or fill in, but in almost every cocktail party there’s one guy who’s driving the bus. I start out thinking that the drums might take the ‘lead’ but then after re-recording, I change my mind and realise that it was the bass that was the had the more sparkling wit (laughs) so I record him last so as to give him the last word on each topic.

RCOddly enough, I think I understand you completely. Which may be a first! So let’s quit while we’re ahead and end here.