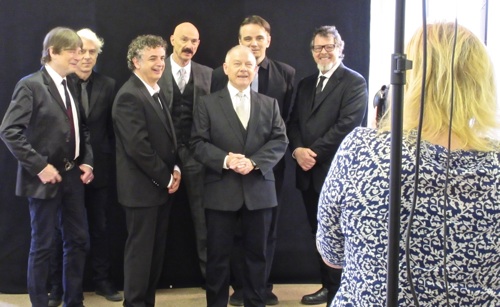 I love this image. Love it. These guys could be celebrating achieving tenure at Walden College. But it’s King Crimson doing publicity for a fall tour. Now I have no idea whether the new ‘configuration’ will be any good (the last few versions were kinda ho-hum) but they’ve got the right idea.

And I love the fact that Robert Fripp is an adult. He’s not a 60 year old man trying to act like a pirate. He’s a grown man, playing music for adults. At 115db. 😀

King Crimson was always about a quiet ferocity. The press tended to depict KC as this pointy-headed intellectual vibe, probably because Fripp is so pretentious and ‘British.’ But when you go to a KC show, it’s takes no prisoners. Fripp always reminded me of George Smiley… this tightly wrapped guy, who knows what he’s doing, but with a rage you cannot believe.

And this is (or should be) the future of classical music.

As some of you know, I’ve had this ongoing fight with the local arts mavens. A lot of this has (so far) doomed Detroit from getting ‘mounted.’ But my point is not to talk ‘sour grapes.’ What I’ve learned during this ‘process’ is that the old guard is having an existential migraine over how to get butts into seats for orchestra, ballet and (gasp!) opera. So everywhere the various arts council funders try all these wacky things to get ‘promote’. Far wackier than a rock band in tuxedos.

And Seattle is no exception. Some of my recent fave marketing gimmicks: Playing in street clothes. As if it’s the tuxedo that’s keeping people at the disco and out of the concert hall. 😀 And cell-phone apps. Cell-phone apps, so people can dink with their phone while ‘listening’. And then there was the recent Sir Mixalot Concert. They dug up Prokofiev (or is it Rachmaninov’s?) grandson and paid him to write ‘orchestral variations on ‘Baby Got Back’. I am not kidding. Check it out.

But to paraphrase Bill Clinton: IT’S THE MUSIC, STUPID! People are sick of Mozart. They wanna hear something for adults, but that wasn’t written 100 years ago. Or is boring. Or repetitive. You want repetitive? Go to a dance club. What does repetitive music do to people sitting in a padded chair? Same thing it does to me. Puts ’em right to sleep.

It makes sense to market King Crimson in tuxedos just as it did for Miles and the Modern Jazz Quartet in the 50’s. They were demanding a sense of dignity for their art and this is just as important now as it was then. For today, ‘rock’ is just as rudderless as ‘classical’ music.

After so many years of terrible rock ‘critics’, old guys who look like clowns playing in casinos and the current worship of dance music, one has to really demand to be taken seriously if you feel you have something to say besides, “Call Me, Maybe.”

Conversely, classical music has suffered from so many decades of being disconnected from the audience that they literally have no idea how to be relevant. And frankly, most classical musicians lack balls. The community is so incestuously ivory towered that they wouldn’t know ‘relevant’ if it jumped up and bit ’em in the Strad. Which is why so much contemporary classical music never finds an audience… unless it’s new-agey enough to be played at a hot yoga class. And don’t forget that there is also an economic issue. You simply cannot get orchestra players on board with programming music that might require them to give up a few violin chairs in favour of some modern instruments. Don’t kid yerself. There’s as much ‘tenurism’ in the classical world as there is in teaching. Rebalancing the forces away from ‘Wagner’ towards configurations that are more modern (more percussion, some rock instruments, etc.) is asking for war with all 32 fiddlers.

What Crimson tried to do was create music that was as ‘worthy’ as modern concert music. It’s complex, chaotic, structured, touching and loud as hell… all at the same time. In short, it’s a worthy and organic amalgam of the concert hall and the Marshall stack and there’s as much meat in there for exploration as in an variation used by Elgar or Beethoven.

From the first time I heard KC I believed, as I still do, that there could be a convergence between ‘rock’ and ‘classical’. This was prevented by critics who see ‘rock’ as being intrinsically adolescent (if it’s sophisticated it can’t be any good.) and blue-haired types who were simply too square and snobbish to appreciate (or even understand) any world outside.

What is maddening to me is that there are actually groups that have the nerve to call themselves ‘rock orchestras’. Seattle has one. They play a pastiche of ‘classic rock hits’ that fuse the absolutely worst bits of ‘rock’ and classical: as pretentious as Pink Floyd and as inspid as Mozart’s not-so-talented 2nd cousin.

My hope is that someone will come along like Miles, with the charisma to make a new music that demands the dignity of the concert hall. But at 115db. I truly believe that is what it will take to get the butts in the seats.